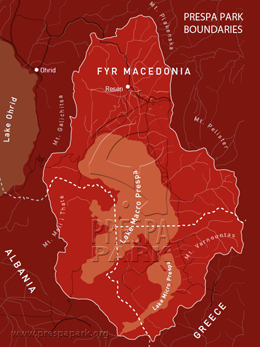 Greece, Albania and the Former Yugoslav Republic of Macedonia (FYROM) signed a formal agreement for protection of the unique Prespes Lakes last week, on the anniversary of World Wetlands Day and exactly 10 years since the declaration of the Balkans’ first transboundary eco-agreement.

The key aim of the agreement is to facilitate trilateral cooperation to ensure comprehensive protection of the Prespes Lakes wildlife and sustainable development in the Prespes Park area, as well as to develop a comprehensive plan for managing the waters flowing into the Prespes basin.

The history of the agreement

The drive for the signature of the agreement was revived last November by Greek Prime Minister George Papandreou, who organised an informal summit of the three countries’ premiers at the Ramsar-protected Prespa National to discuss cooperation in the management of the Prespes Lakes Park. The effort was launched at a trilateral summit on February 2, 2000, symbolically held on World Wetlands Day, by the then prime ministers Costas Simitis of Greece, Ilir Meta of Albania and Ljubco Georgievski of FYROM, in a declaration that designated the Prespes region a National Park, the first of its kind in the Balkans. The aim of the park is to protect several the region’s rare wildlife, as well as enhancing cooperation among Balkan countries.

After the declaration, an informal coordination committee was set up by the three countries, which from 2001 until the present has advanced the planning and execution of joint programs for protection of the area and improvement of the local residents’ standard of living. The development of the Strategic Action Plan for the Sustainable Development of Prespes Park, financed by Greece, was one of the first major achievements of this collaboration.

In the context of the decade-long cooperation, many local agencies (chiefly municipalities and NGOs) have been working together to carry out joint programs, often funded by international financial organisations. Even though there has not been a legally binding agreement so far, such initiatives have resulted in significant joint actions that have promoted both sustainable local development but also brought the populations of the neighbouring countries closer together.

Prespes: A treasure chest of biodiversity

The Prespes basin stands out for its exquisite biodiversity, which has been acknowledged at European and global level not only for its rich fauna and flora, but for the quality and rarity of the species found there.

The Lesser Prespa Lake and Greater Prespa Lake of Florina, northwestern Greece form a unique ecosystem and constitute a natural border between the three countries.

The two tectonic Lakes, among the oldest on Earth, are home to the Mediterranean’s most ancient species of trout, and also the short-horn pygmy cow, both of which are threatened with extinction.

The Prespes Lakes are also among the 10 most important wetlands of the Mediterranean, while eight of the 11 fish species native to the lakes are endemic and not found anywhere else in the world.

The area is a large basin at an altitude of 850m which contains two lakes, Mikri (Lesser) and Megali (Greater) Prespa. Megali Prespa is today located in Greece, Albania and FYROM while Mikri Prespa is entirely located within Greece and Albania.

According to the UNESCO World Heritage Center, the area is characterized by outstanding natural beauty and has been inhabited without interruption since antiquity (with traces of ancient habitation in the area of “Lemos” and on the island of Agios Achilleos) to the present day.

The local population has closely associated the area, its history and its natural beauty with myths, legends and traditions.

The Prespes region contains the highest degree of species biodiversity in a corresponding surface area in Europe. It is a unique lake landscape of outstanding natural beauty that includes a wealth of monuments from the Byzantine and post-Byzantine period.

Protected areas in the three countries

Over the last few decades, all three countries have taken a series of steps to protect the unique ecosystems of Prespes.

In Albania, the Prespes National Park was established in 1999 aimed at the restoration and sustainable protection of critical land and aquatic ecosystems in the area.

In Greece, the Prespes National Park was established in 1974 for the protection of the Lesser and Greater Prespes Lakes and their outflow basin, while in 1975 the area was designated a “Place of Significant Natural Beauty”. Further, the Greek section of the Lakes’ basin is included in the National List of 163 areas that have been entered in the Natura 2000 network as “Special Protected Areas” (SPA) in accordance with the EU ‘Birds’ (conservation of wild birds, 1979) and ‘Habitats’ (conservation of natural habitats and wild fauna and flora, 1992) Directives.

The sheer beauty of the Prespa landscapes is enough to draw visitors. Versatile cultural and traditional elements, valuable ecological sites, good food, picturesque villages and historical layers of Byzantine and Ottoman monuments are spread across the basin. Therefore the promotion of tourism seems to be essential for the economic development of the area and the preservation of its historical, cultural and ecological identity.

However, uncontrolled tourism may aggravate stress on ecosystems and unequal distribution of income opportunities, so a planned basin-wide approach addresses the tourism-related infrastructure – roads, water supply and sewage, as well as coordinated, nature-based planning and marketing.

Visitors come to Prespa at all seasons. The main tourist period lasts from June to September with a peak in July and August, while in Greece winter season is also very busy. Domestic guests dominate the Prespa tourism market in all three countries, with less than five percent of foreign tourists.

Local experts estimate the current capacity for tourists in Albania at 75 beds, in Greece 300 beds, and FYR of Macedonia 7,200 beds. Tourism is actually on the rise in both Greece and Albania, while FYR of Macedonia has lost 50% of its clients (also due to external causes).

Tourism is expected to increase over the next 20 years, calling for the development of communal and traffic infrastructure, and regional planning to encourage increased tourism. It requires the improvement of the wastewater and solid waste treatment which currently do not suffice even for the needs of the inhabitants.

Services offered in the Greek Prespa mainly relate to recreation and hotels and taverns. Estimates from year 2000 suggest an annual income of just under two million US dollars for accommodation and meals. During the last few years there was a steady increase in the tourist flow, together with signs of the inefficiency of the existing infrastructure.

Tourism has been given a prominent role in Albania’s development strategy, and Macro Prespa is considered one of the most important. However, this potential is unexploited due to the generally unfavourable economic situation and the lack of basic tourist infrastructure. Nevertheless, certain initiatives are directed to the Micro Prespa region in Albania too.

The current state of tourist infrastructure presents an obstacle, in combination with the problems of other services in the area (telecommunications, drinking water etc.). The quality of the services offered calls for improvements too: boat trips, swimming, guided tours of historical monuments, insufficient number of nature observation points, small-scale conference facilities.

The lack of public investment in the conservation and restoration of tourist attractions – archaeological, historical, cultural and ecological – is aggravated by the insufficient information and promotion. The stresses on the environmental health take their toll on tourism too, like the challenged appeal of the lakes as swimming resort due to eutrophication and increased pollution.

The waste disposal problem in Prespa is important. The foreseen increase of visitors and changes in consumption patterns, request for good planning and the development of necessary infrastructure to accommodate future needs.

Large-scale or intensive development initiatives in any sector (intensive agriculture, manufacture, industry, mining, mass tourism etc.) are often incompatible with the preservation of the values of the area. Sustainable tourism, on the other hand, keeps a balance among the environmental, economic, and socio-cultural aspects of tourism development in order to guarantee long-term benefits to the recipient communities.

5 thoughts on “Sustainable Tourism Observatory: Trilateral Formal Agreement between Greece, Albania and FYROM for the protection of Prespes Lakes.”