According to the latest traveller insights report commissioned by Amadeus, 47% of travellers lack full comprehension of corporate travel policy and 34% of travellers went ‘off-plan’ in 2012. It shows that business travel goes online while mobile still has a long way to go, opening up opportunities for travel managers to build a more effective relationship with travellers.

The report, ‘Amadeus Business Travel Insights: the 21st Century Business Traveller’, charts the behaviour and aspirations of business travellers across the UK and Ireland, identifying opportunities for travel departments to introduce new services and technologies that will deliver additional value to travellers.

Tipping point reached in the ability to book online: the data displays new opportunities for self managed travel as two thirds (66%) of travellers are now able to book their business travel through an online booking tool. Only a third of travellers (33%) are able to book travel on a mobile or tablet device, providing a significant area of opportunity for travel managers, TMCs and technology companies to put their knowledge and company policies in the hands of the traveller.

Half (51%) of the survey respondents had to make changes to their travel plans in 2012 with 37% having to amend their flights whilst on the road. These statistics indicate a clear opportunity for the travel department to add value as only 30% of travellers said the department had been ‘very effective’ at making the necessary amendments to their bookings.

One third (34%) of travellers surveyed said that they had gone “off plan” during their 2012 business travel. However, this increased to half (51%) for those travellers who made 11 or more trips in 2012, nearly a fifth (18%) of them went “off plan” at least five times during the year.

Convenience is the top priority for business travellers

The report found that convenience is prioritised by business travellers above cost and comfort, with 62% of respondents stating this was the most important factor when travelling for business. Just over a fifth (22%) stated cost as their top priority, with only 15% putting comfort first. 32% of the business travellers who took part in our survey would also like to have the opportunity to extend their business trip to include self-funded leisure travel and 14% would like to be provided with information into local sights.

Ambivalence to the corporate travel department

As Diane Bouzebiba, Managing Director of Amadeus, UK and Ireland, comments: “Putting the [corporate travel departments’] expertise in the hands of corporate travellers and exploring mobile technology to facilitate the planning, booking and amendment of travel arrangements, will go a long way to help keep travellers on plan, safe and better connected in 2013 and beyond.”

The report is based on a survey of over 400 UK and Ireland adults who work for large companies and regularly travel for business and was conducted in December 2012, by ICM Research on behalf of Amadeus UK.

According to new research conducted by Longwoods International and commissioned by the U.S. Travel Association, reducing state and local tourism marketing programs in the name of saving taxpayer dollars impedes economic growth.

“There’s a reason that America’s most prominent brands continue to increase their marketing budgets: it works,” said Roger Dow, president and CEO of the U.S. Travel Association. “This study proves that destinations must operate like Nike, Apple and similar businesses that have followed the marketing path to success. Substantial cuts to destination marketing programs are counterproductive and will have long-term negative economic consequences.”

After inconsistent promotion efforts for decades, the Pure Michigan state promotion campaign began regionally in 2006 and went national in 2009. The powerful and non-traditional storytelling of Pure Michigan has stimulated 7.2 million trips to Michigan by out-of-state visitors. Those visitors spent $2 billion at Michigan businesses and generated $138 million in new tax revenue for Michigan – more than three times the cost of the advertising itself.

In 2010, the second year of national Pure Michigan. advertising, spending by out-of-state leisure visitors jumped 21 percent, from 2009 to $6.4 billion. At the same time, Michigan tourism-related employment rose by 10,000 jobs. While facing a large deficit and forcing significant cuts to entitlement programs, Michigan Governor Rick Snyder nonetheless added $10 million in additional funding to the Pure Michigan® campaign in 2011, stating: “It brought in more tax revenue than it has cost our state.”

Through a sustained marketing program over the last 15 years, Philadelphia’s image has transformed and visitation has surged, delivering returns to the city and state. “Fifteen years ago, Philadelphia was considered a two-hour stop,” said Meryl Levitz, founding president and CEO of GPTMC. “Then we became on overnight sensation, and now we are a premier destination where visitors stay for multiple days and come back several times a year.”

Since 1997, overnight visitation to Greater Philadelphia has grown 66 percent, six times faster than the national growth rate of 11 percent. GPTMC’s most recent campaign began in 2009 in the midst of the deepest and longest economic downturn since the Great Depression.  With a budget of just $4.3 million in 2009/2010, With Love, Philadelphia XOXO generated 3.7 million incremental trips to the Philadelphia region, injecting $432 million in visitor spending and $24 million in new state tax revenue and $22 million to local governments. The marketing program also generated over 7,000 additional jobs for Greater Philadelphia at a reasonable cost of $600 in advertising for each job created.

According to the U.S. Travel Association’s 2009 annual Survey of State Tourism Office Budgets, 31 states cut funding for tourism advertising and marketing by 13 percent, or $52.7 million, between 2008 and 2009. The state of Washington closed its tourism office in June 2011, harkening back to Colorado‘s decision to abolish its marketing program in 1993 due to budget constraints.

According to a landmark study by Longwoods International, Colorado eventually lost more than 30 percent of its share of domestic visitors and more than $2 billion annually in visitor spending. With funding for Colorado’s marketing program now restored, the state treasury sees a 12:1 return on marketing investment, and trips to Colorado have rebounded to record levels.

The meetings industry is feeling the positive effects of economic recovery. According to the recently released Convention Sales Practices Study, DMO marketing budgets have increased by 7% in the current fiscal year, more than twice the rate of the average convention center’s budget growth.

In 2012, the restrengthening of DMO marketing budgets is expected to continue with a projected 6% growth.

With the number one expenditure of these growing marketing budgets being spent on “people-based” marketing (ie: trade shows and conferences), how exactly is a DMO’s success measured for their marketing dollars and efforts spent?

Convention center success is not as clearly defined throughout the industry, but 65% of venues indicate total event spending at the venue and convention center operational profit/loss as the top success metrics.

The Flash Eurobarometer “Survey on the attitudes of Europeans towards tourism”(No 328) has been conducted between 24 and 28 February, 2011. Over 30,000 randomly selected citizens aged 15 and over were interviewed in the 27 EU Member States, Croatia, Turkey, the former Yugoslav Republic of Macedonia, Norway and Iceland.

The objectives of the survey were to study:

• the reasons why respondents did not go on holiday in 2010

• the characteristics of citizens’ main holiday trip in 2010

• the financial aspects of taking a holiday

• various attitudes of citizens towards tourism

Across almost all countries included in this survey, the largest proportion of respondents – who had not taken a holiday in 2010 – said this was because of financial reasons; such reasons were cited by more than 6 in 10 respondents in Hungary (68%), Bulgaria (65%) and Romania (62%). 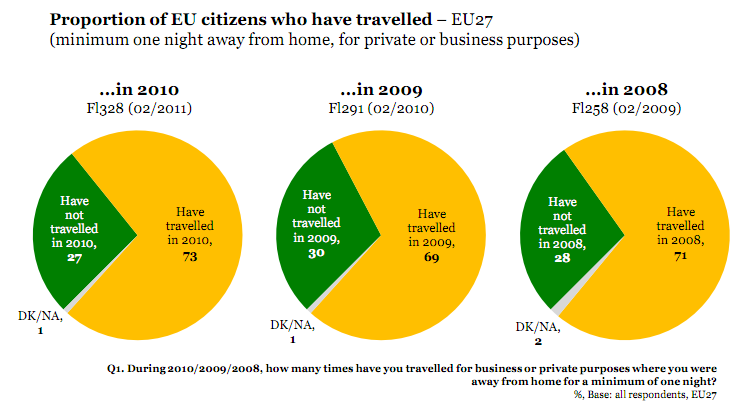 When asked which holiday leisure activities EU  citizens would give up first if savings were needed while they were actually on holiday, the largest proportions of interviewees selected “beauty or wellness treatments” (27%; + 3 percentage points compared to 2009) and shopping (21%; unchanged compared to 2009)

The largest proportion of holidaymakers across the EU (36%) said that the major motivation for their main holiday in 2010 had been “rest and recreation”. Just under one in five (18%) had wanted a sun/beach holiday and 17% said the main objective had been to visit friends or relative. 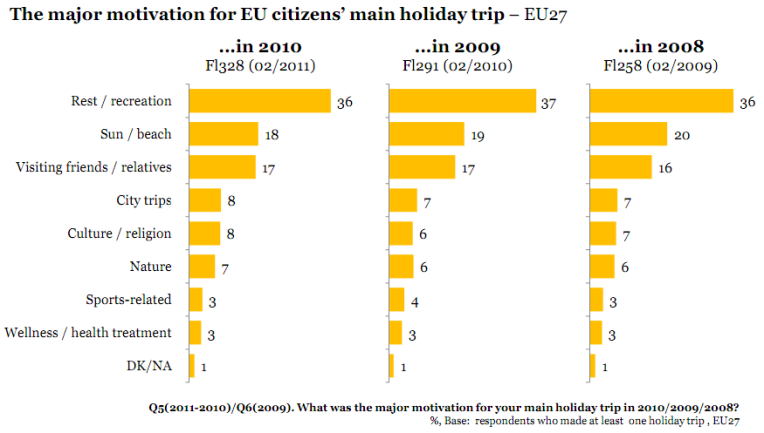 When deciding on a holiday destination, the largest proportions (32%) of EU citizens named the location’s environment (e.g. its overall attractiveness) as the key consideration. Cultural heritage (27%) and options for entertainment (14%) were the second and third most widespread responses in regard to factors that influenced a choice of destination.

As in previous waves, the largest difference  in terms of information sources when comparing respondents with a preference for “off the beaten track” holidays and those who preferred more “traditional” holiday destinations was seen when looking at the importance of the Internet: 54% of the former respondents said that the Internet  was an important source of information when planning a holiday compared to 42% of the latter.

When asked about their holiday destination in 2011, almost 4 in 10 (38%) EU citizens answered that they were planning a holiday in their home country. One in five interviewees said they were planning to take a holiday within the EU and a somewhat lower proportion (16%) indicated that a non-EU country would be their main holiday destination in 2011.

Find the full Report at: ec.europa.eu/public_opinion/flash/fl_328_en.pdf

Despite the recession and hardships facing the trade, agents remain relatively upbeat about working in the travel industry, according to a Travel Weekly survey.  While job satisfaction remains high and the love of working in travel is still strong, there is concern about the future of high-street agencies, pay and job security.  The Working in the Travel Industry 2010 report, carried out in association with destination marketing firm Fox Kalomaski, surveyed 168 agents during December last year. Click here for the full article.

Will the number of traditional high street agencies decline over the next 5-10 years? 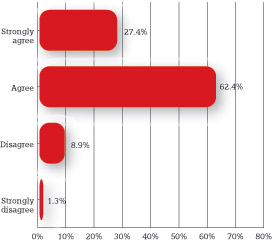