Based on its reference global benchmarking survey TRAVELSAT© Competitive Index, TCI Research reports that destinations still have to improve m-tourism experience towards their visitors, pointing out that great technology is useless if it does not provide them the right content on the right time.

With a Competitive Index hardly exceeding 100 (meaning just “Acceptable” on the TRAVELSAT Scale), digital hospitality today is not rated higher than the “Staff efficiency in Tourist Info Centers”.

However the survey highlights significant differences according to the destinations, markets and travel segments:

Commenting on the results, TCI Research CEO Olivier Henry-Biabaud adds: “Competitive destinations are those able to find the right balance between digital and human-based hospitality services, each completing the other in a consistent way all along the visit. Paradoxically abounding development of mobile apps in the tourism sector may also loose visitors destinations make so many efforts to guide! Digital hospitality should better take into consideration fluctuant visitors’ information and assistance needs during the stay and Destination Management Organisations have a key role to play for clarifying existing applications available both at trip planning and visit stages. Expected benefits for those providing better m-tourism experience: increasing spending at destination, repeat visits and recommendation levels”.

Technical note: analysis extracted from the TRAVELSAT Competitive Index Survey based on 25 000+ representative international travellers (leisure, MICE and VFR) realized in 2011 and 2012 in 200+ destinations and markets.


abouTourism is the exclusive representative of TRAVELSAT© Competitive Index in Greece & SE Europe/Eastern Med Destinations. For more information you may contact us at: info@abouTourism.com or  (+30) 210 8941610.

A new research report just released by ForwardKeys in cooperation with Amadeus, unveil a range of travel data trends, based on actual global air reservations, which details the impact of the London 2012 Olympics.

With approximately 50 days to go before the Games, the findings provide a country-by-country view of where visitors to London during the Olympics period are coming from. The data shows that booking figures for the Olympics period, made by May 12, 2012, are 13% higher than in 2011.

Key trends from the research include:

Top source countries include U.S. and Germany, with arrivals from BRICS increasing by 40%

The U.S. is the single biggest source nation for traffic to the Olympics, accounting for 19% of total expected arrivals – a 12% increase over 2011. Germany is the second largest source market, responsible for 8% of total expected arrivals. Interestingly, BRICS nations (Brazil, China, India, Russia, and South Africa) are emerging as important source nations for long-haul travel to London during the Olympics period: BRICS countries are seeing a 40% increase in bookings compared with 2011, representing a 9% share of total arrivals.

Europe is the source region for the greatest proportion of arrivals to London during the period of the Games, accounting for 46% of total expected arrivals, and North America is second with a 23% share; this represents an increase of 18% and 10% over the same period in 2011 for Europe and North America respectively. The third biggest market, Asia, the source region for 9% of arrivals, has seen a significant increase of 27% over 2011 bookings. 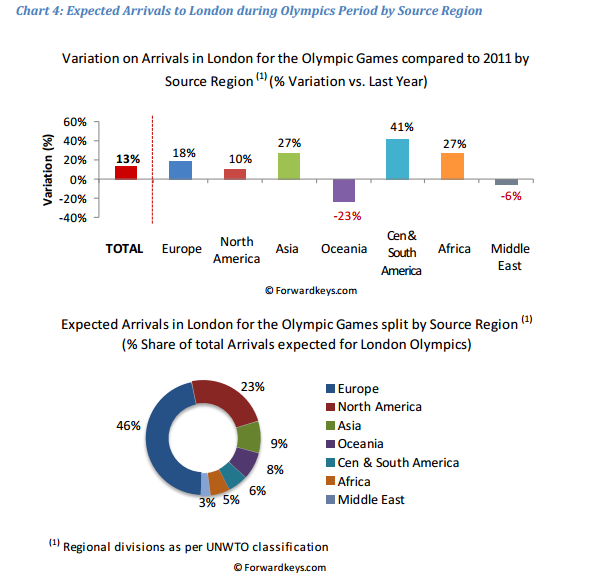 New York is most popular source city for travel to London in the U.S.

The 12% increase in expected traffic from the U.S. to London during the Olympics period is being fuelled by traffic from the nation’s largest cities: New York City, in particular, is seeing a dramatic 48% increase in bookings to London for this period compared with 2011. San Francisco is also seeing a remarkable growth, up 29% from 2011, with Chicago and Washington also registering increases of 13% and 18%, respectively. Remarkably, one large U.S. source city – Los Angeles – is seeing a decrease in traffic to London during the period July 23 to August 12, 2012, at -3% compared to 2011.

From the Opening Ceremony onwards, throughout the duration of the Olympic Games, London will experience a high level of occupancy (i.e. number of visitors staying in London), with numbers 7% higher than last year for the period between the Opening and Closing ceremonies. The greatest increase in occupancy compared with 2011 is between August 4 and 8, 2012.

It seems that Londoners intend to remain in the city and enjoy the spectacle during the Olympics period: departures to any destination from London for the period before the Opening Ceremony are 5% below 2011 levels. Across the whole summer (from July 2 to September 2, 2012), 2% fewer Londoners will leave the city than in 2011. However, it seems that Londoners aren’t forgoing a holiday altogether, simply deferring it, as three weeks after the Closing Ceremony, departures will increase to 10% more than in the same period in 2011.

Note: The study is based on air reservations processed through online and off-line Travel Agencies worldwide that use any one of the 4 leading reservation systems (GDS), as aggregated within ForwardKeys.com database. Data analysis concluded on 12/05/2012, meaning any air reservations made after this date are excluded from this analysis.

The UNDP Black Sea Trade and Investment Programme (BSTIP) is pleased to present the ARGO II Black Sea Tourism Forum & Workshop to take place in Nafplio, Peloponnese, Greece, on 3 and 4 May 2012, at the “Vouleftiko”. The two-day event is brought to you with the support of the Region of Peloponnese, the Municipality of Nafplio and the Argolida Chamber, with the cooperation of AbouTourism International Destination Consultancy.

Aiming to enhance tourism business partnership in the Black Sea Region, the ARGO II Black Sea Tourism Forum & Workshop will host selected Tour Operators and National Airlines representatives from more than 12 countries of the Black Sea Region introducing them to the unique Region of Peloponnese and its selective range of tourism suppliers. The Forum includes a workshop with a series of pre organized B2B meetings between the Black Sea representatives and the suppliers from the Region of Peloponnese, as well as a Conference day with sessions on digital tourism and destination management offered by leading experts.

Mr Barry Kolodkin, BSTIP Programme Manager commented on the importance of the ARGO II Forum: Travelers are becoming increasingly sophisticated; seeking destinations that will appeal specifically to their wants and emotions. The Peloponnese in Greece, like Tuscany in Italy or Provence in France, is such a destination. This forum will enable the Peloponnese to display its prodigious offerings to tour operators from the Black Sea region, a region with growing disposable income, where travelers seek new and exciting destinations.

BSTIP is a unique initiative jointly co-financed by the Hellenic Republic, the Republic of Turkey, the United Nations Development Programme (UNDP) and the BSEC (Black Sea Economic Cooperation Organization). The main objective of the programme is to promote the regional economic integration process among the BSEC Member States.

TIC is a vital part of the visitors experience, a major component of the Tourist Information Network & it plays a crucial role in the Destination Management Process. However, a TIC should not stand alone. It should be part of a visitor information plan and able to reflect the aims & objectives of the destination’s visitors services strategy. Take a moment and go through my slideshare presentation focusing on the role of tourist information centres in  contemporary destination management (Cases of Athens, Cape Town & Manchester).

Besides, check the new Manchester & Cape Town’s Visitor Information Centre video features to get a thorough perspective on how two of the best tourist information centres operate.

The MVIC makes use of use of sophisticated technology to collect and present information – a far cry from the industry stereotype. It will be the first Visitor Information Centre in Europe to use Microsoft Surface tables – an innovative computing platform that responds to touch, natural hand gestures and real-world objects placed on a display.

The Central CTVIC was redesigned to reflect the new Cape Town’s Tourism identity in real space and become an attraction in its own right for locals and tourists.