Identifying and selecting those market segments that have the best potential for the goals of the destination is certainly not possible without thorough knowledge of the needs, wants, and perceptions of the target market.

The LGBT market is generally considered an important contributor to tourism worldwide with an estimated annual economic impact of LGBT travelers of over US$65 billion per year in the U.S. alone. A report recently published by the UN World Tourism Association (UNTWO) in partnership with the International Gay and Lesbian Travel Association found that destinations offering a tolerant culture were reaping the benefits of increased travel to – and spend by – gay travelers.

For destination marketing, the report also cautioned against making assumptions about this market, stating that the wedding market for this sector is a big driver, and that the LGBT sector appears to have bucked the recession trend, bringing higher-than-average spend to their holiday destinations. Generally savvy in digital media, LGBT travel is also influenced by social media and digital or actual word of mouth.

Destination marketing associations who were successfully attracting the LGBT market were working proactively at gay-targeted expos and fairs but were also aligned with equal rights organizations that promoted tolerance.

As June is pride month, it’s interesting to see how destinations and hotels have recently come out to attract gay tourism.

Win a Date with Stockholm

The new social media campaign, Win A Date With Stockholm, is live online until June 30, 2012 at www.winadatewithstockholm.com and is organized by Stockholm Visitors Board, VisitSweden, SAS Scandinavian Airlines and the Stockholm Gay & Lesbian Network.

The campaign calls to ‘Discover the world’s ’Favourite LGBT-Friendly City’, fly with award-winning SAS Scandinavian Airlines and meet with a local Stockholm resident guide – to highlight some of the best of their own favourite things which the city has to offer.

Entrants choose between six guys or girls, depending on what most interests them, each being a Stockholm ambassador for a specific theme, such as Arts & Culture, Sports, Outdoor, Fashion & Design, Food & Flavours or Music & Nightlife.

Six men and six women represent their various favourite leisure themes in the city, and people can choose the person they want to meet based on the program they have tailored to their specific theme.

Marriott  “Be you, with Us”

Marriott International also announced this month a new marketing campaign aimed at LGBT travelers, friends and families – “Be You, With Us”.

The “Be You, With Us” campaign launches in celebration of Pride Season (often observed from June through September) in cities around the world that host gay pride parades and festivals to celebrate the LGBT community.

The campaign is filled with imagery and messages that welcome all guests to be themselves when staying with Marriott. The campaign comes to life through travel packages and amazing hotel experiences and culminates with a sweepstakes where one grand prize winner and guest will receive a trip valued at $5,000 to the 2013 New York, San Francisco or Berlin Gay Pride Festivals.

“Stay Hilton. Go Out” was launched in early April, and offers special amenities and deals for LGBT travelers and friends of the community at more than 175 Hilton Hotels & Resorts and Hilton Grand Vacations properties worldwide. 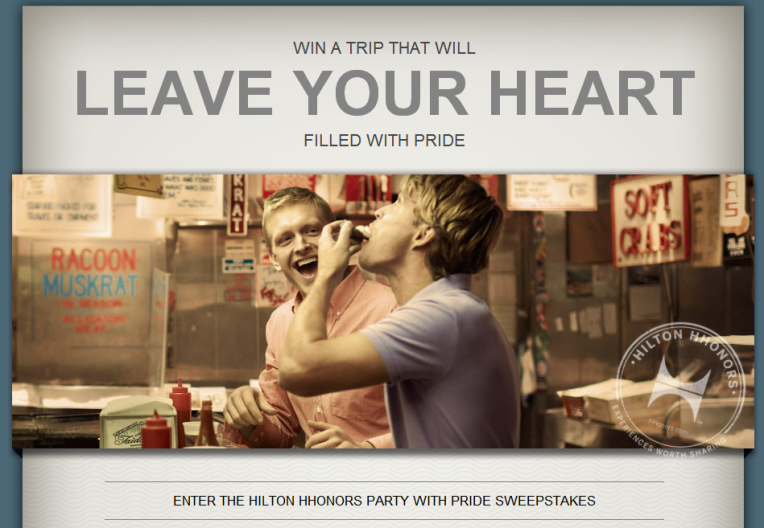 Legendary football club Real Madrid had signed a deal to promote Spain and Madrid as tourist destinations in April.

The new marketing campaign “Visit Spain, Visit Madrid”  is now ready and shows all of Real Madrid’s star players, like Cristiano Ronaldo act as “brand ambassadors” for both the Spanish capital and the country as a whole.

Tourism authorities expect the three-year agreement will reach a potential audience of over 300 million people because of Real Madrid’s worldwide fan base.

A Spanish Tourist Office spokeswoman had commented after the agreement was secured: “This is a groundbreaking agreement in which both Madrid and Spain will be promoted internationally through one of the most renowned clubs worldwide promoting both tourism brands to all corners of the globe.

The Valencia Region Tourist Board has launched a new five million euro (£4.4 million) global marketing campaign to promote the destination – including the Benidorm, Valencia Terra i Mar, Costa Blanca and Castellon brands – both nationally in Spain and internationally in key markets including the UK.

Using the strapline “Intense experiences must be shared”, the two-year multi-media campaign is centred around the traveller as generator of content and key influencer through the use of social media.  It combines innovative online, social media and street marketing with traditional media advertising and PR.

Regional Tourism Minister , Belen Juste, explains: “Travellers nowadays like sharing their holiday experiences with others on Facebook, Twitter, YouTube or Flickr; they read other people’s comments or travel blogs before planning their holiday; and use their mobiles to stay informed and connected before, during and after their trip.  Our new campaign reflects all this, building on some of the initiatives that we have already introduced, such as blogger fam trips, mobile apps and advergames.”

The new global campaign kick-started this week in Spain with a major promotion at Madrid’s Atocha train station, departure point for the new AV E high-speed train to Valencia, and a series of TV and radio ads that invite consumers to live intense experiences in the Valencia Region.  This will also be the theme of a special roadshow which will visit 11 European cities including Liverpool and Birmingham.  Other activities planned include the creation of themed microsites on http://www.comunitatvalenciana.com, YouTube branded channels, more advergames and new mobile phone applications to help visitors make the most of their trip to the Valencia Region.

Utilizing local people and their experiences,  as representatives of the tourism brand  is a method that several Tourism Boards have used in order to strengthen the “local knowledge-authenticity” factor and their brand proposition. In order to have positive results based on set targets there appears to be one essential condition: that the selected ambassadors are true  representatives of the brand essence.

Scottish ambassadors as the face of Scotland’s brand essence

2011 will see the continuation of International Marketing’s flagship ‘Scotland. Welcome to our Life’ Pan-European Touring Campaign, featuring a “Meet the Scots” theme – a group of people whose lives and work link to key Scottish tourism themes.

The Scots are the conduit for the campaign messages and represent the “Human” element of the brand essence “Dramatic, Human, Enduring”. They represent the warmth and passion of the Scottish people and offer insider knowledge to consumers.

Car touring remains the largest leisure tourism market to Scotland from Europe and the campaign promotes touring holidays with a particular focus on Seasonality – to attract visitors in the shoulder seasons, thus addressing one of the levers for growth, Capacity Utilisation.  Additionally the campaign aims to generate higher spend per trip and to contribute to VisitScotland’s geographic spread objective by encouraging visitors to explore more of Scotland.

Authenticity is an important driver in holiday choice for its target consumers, as is a desire to engage with the locals of the country they are visiting. The Scots are utilised in VisitScotland’s marketing activity to underline the authentic nature of a holiday in Scotland, whilst also pushing the scope for social engagement. Each Scot represents a particular theme and delivers information and tips associated with that theme. They are also featured on the campaign websites with information on who they are, what they do and they also provide consumers with personal tips and suggestions for things to do in every month of the year.

The $100,000, 2011 Queensland Season of Sailing campaign will promote all the fantastic sailing events along Queensland’s stunning coastline between April 22 and September 6, with regattas in Brisbane, Sunshine Coast, Central Queensland, the Whitsundays and Townsville. 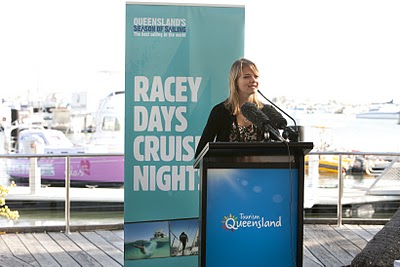 Queensland is Australia’s premier sailing destination and this campaign encompasses a wide range of stay and sail experiences which are bound to make Sydneysiders and Melbournites want to leave the cold southern winter to live it up on the Queensland coast. The premise behind this year’s campaign is to encourage visitors to experience a sailing event and book a holiday package with their friends and family. It’s about promoting opportunities for visitors to experience Queensland’s sailing events first hand, enjoy all that the sailing destinations have to offer, take to the water and learn how to sail, have a bareboat adventure or enjoy a charter cruise.

This initiative provides people with a unique incentive to visit Queensland’s regional holiday destinations during the traditionally slower winter months.Queensland’s 2011 Season of Sailing campaign will be promoted through print ads in newspapers and sailing magazines, online and via social media as well as at a grass roots level via Yachting Australia’s members.

Tourism Calgary turned to Calgarians to help advertise their city

Tourism Calgary is turning to Calgarians to help advertise their city with a fully integrated and user-generated regional marketing campaign that kicked off in March.

The “Capture Wow” campaign invites locals to upload descriptions and photos of their biggest “wow” experiences in Calgary at CaptureWow.ca, said Gisele Danis, vice-president of Tourism Calgary. The best photographs will be used in an online and traditional advertising campaign called “Experience Wow” later this year in Alberta, Saskatchewan and B.C.

Danis said user-generated photography was a way to extend Tourism Calgary’s “small” marketing budget. “We can’t afford the half-million dollars many cities spend on photography for their campaigns, so we turned to the locals, the real experts.”

All pictures will remain on the Capture Wow and Tourism Calgary websites throughout 2011, said Danis, “and we believe they will tell the inside story that Canada’s fourth largest city is a place that offers world-class experiences. The campaign supports the 100th anniversary of the Calgary Stampede next year and the city’s bid to be the 2012 Cultural Capital of Canada”.

The deal means that the club’s star players such as Cristiano Ronaldo will act as “brand ambassadors” for both the Spanish capital and the country as a whole through the “Visit Spain, Visit Madrid” campaign. Tourism authorities expect the three-year agreement will reach a potential audience of over 300 million people because of Real Madrid’s worldwide fan base.

A Spanish Tourist Office spokeswoman said: “This is a groundbreaking agreement in which both Madrid and Spain will be promoted internationally through one of the most renowned clubs worldwide promoting both tourism brands to all corners of the globe.

Mayor Alberto Ruiz Gallardon:
“This city’s most important asset, and that which we feel most proud of, is Real Madrid and its values, which is what we want to promote around the world. In large part it belongs to all Spaniards, because you are ambassadors of Spain.”

Minister of Industry, Tourism and Commerce Miguel Sebastian:
“Real Madrid is an icon of Spain. It is a winning team and one of the most visible clubs on an international level, but what we must promote is its culture of hard work and the excellence in its genes.”