IPK’s World Travel Monitor® recorded a +5% increase in outbound travel to 952 million for the 2013 international travel year. The number of foreign overnight accommodations increased by 4% (7.6 billion nights) and, at 989 billion Euro, international travel spending even rose +6%.

This positive development will continue on a world-wide scale in 2014 and now also extend to numerous “advanced economies.” 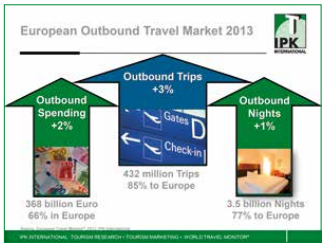 In terms of the types of holidays the Europeans took during the past year, beach holidays were the most frequent, chalking up +4% growth. In contrast, the number of tours only rose by 1% but, conversely, stronger growth (+5%) was noted for city trips and winter holidays.

According to IPK, in regards to Europe’s most important source markets in 2013, Russia again dominated the European growth figures with an increase of 13 percent.

The Germans took 335 million domestic and outbound trips in 2013 (+2 percent), and at 1.7 billion, the number of overnight stays also came in twi percent higher.

According to IPK, there was still no change with respect to the top holiday destinations of the Germans: Austria continued to hold first place in 2013 (17 percent market share), followed by Spain(16 percent) and Italy (12 percent). Austria and Spain were able to hold onto their market shares with single-digit growth rates while Italy’s negative growth resulted in the country losing one percent market share. Other popular German outbound holiday destinations last year were Turkey (eight percent), the Netherlands (six percent), France (six percent) and Greece (three percent).

Although the global economy seems to be heading toward recession, IPK anticipates a five percent worldwide growth in tourism for 2014.

Social media will continue to gain more and more relevance, including for the tourism sector. Nearly every second European outbound traveler is part of the social media community and 16% of them already use social media as a source of information for planning and realizing their trips.