It’s time to take advantage of the available data to get to know your target audience! Segmenting your market will give you the information you need to reach them all with relevant messaging both on traditional and on social, local and mobile media.

In 2004, Philadelphia broke ground with an advertising campaign aimed at LGBT travelers.

That campaign — “Get your history straight and your nightlife gay” — won accolades in the travel industry and generated business.

The Greater Philadelphia Tourism Marketing Corp. has now introduced a follow-up campaign. A 30-second commercial spot, “Miss Richfield’s Selfie Tour,” follows the exploits of the character Miss Richfield 1981 as she snaps pictures of herself and friends at Independence Hall, the Liberty Bell, the Rocky Steps and other sites. Miss Richfield is a flashy drag queen character created by Minnesota native Russ King.

“Ten years ago, Philadelphia was proud to officially ‘come out’ as a gay-friendly destination when we invited LGBT travelers to visit,” said Meryl Levitz, president and CEO of GPTMC. “With our new commercial, we’re going beyond our history roots and reiterating our invitation, celebrating both the city’s evolution into a premier destination and the LGBT community’s progress over the last decade.”

Starting next month, the commercial will air on the Bravo and Style networks in Philadelphia and Washington, D.C. and on Logo TV nationally. It will also run on advocate.com, out.com and outtraveler.com. GPTMC says it’s only the third major campaign of this kind, behind Philadelphia’s own 2004 effort and a 2011 campaign done by Key West, Fla.

Destination D.C. is Cool- or is it?

Destination D.C., the city’s official convention and tourism corporation—has announced the “D.C. Cool.” campaign, aimed at luring visitors away from only seeing traditional tourism spots, like the National Mall, monuments and Smithsonian museums, and getting them to visit various other cultural landmarks and neighborhoods outside of downtown D.C. .

The campaign will launch in February, in order to coincide with an installation the Portrait Gallery is doing that month called “American Cool,” which will feature mostly black-and-white photos of American icons that define, well, cool: Marilyn Monroe, James Dean, Miles Davis, which is where the organization got the idea from, according to Destination D.C. . 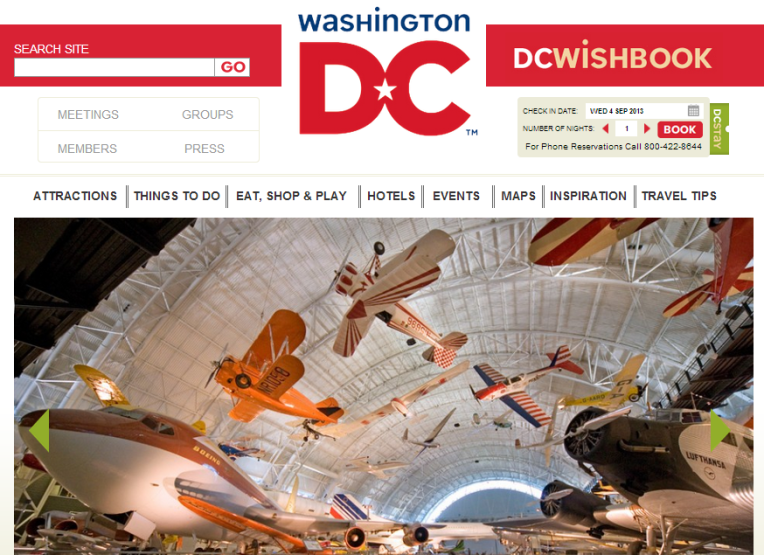 The D.C. Cool campaign will also use Destination D.C.’s partnerships with Cultural D.C., the D.C. Commission on the Arts and Humanities and the Restaurant Association Metropolitan Washington, in order to introduce visitors to the the city’s vibrant nightlife and restaurant scene.

“So many people think of D.C. as big government, and money men, and serious history, and that’s all good. But there’s such a bigger piece to the city,” Maciejewski said. “D.C. Cool is all about getting them off the National Mall to experience the nightlife, and the neighborhoods, and the restaurants. To get a feel for the cool side of the city.”

The key pillars of D.C. Cool are the words “bold, original, unique, dramatic and inspiring.” The vibe the city is trying to portray is highlighted in a short video that attempts to embody cool: There’s deep-voiced narration that sounds suspiciously like Morgan Freeman, there’s the oh-so-trendy fish-eye camera shots, there’s jazz in the background.

While the campaign’s title may attract haters, since after a recent presentation about D.C. Cool to stakeholders and press not everyone was impressed, Destination D.C. is relying on the people of the city to tell visitors what’s cool, which is actually pretty cool.

Thailand:  The Health & Wellness Destination for the 40+

As part of its international “Find Your Fabulous” wellness and medical tourism campaign, the Tourism Authority of Thailand (TAT) is unveiling a friendly global competition intended to salute ladies who are still fit and fabulous after their 40th birthdays.

The Fabulous 40+ Photo Contest invites women from around the world to submit images showing off their fabulous form, and the contestant showing the most youthful, age-defying appearance will be rewarded with an exclusive 3-day Find Your Fabulous trip to Bangkok.

Candidates become fans of ThailandMedTourism and the Find Your Fabulous campaign; then, they submit their most fabulous photos. The winners of the Fabulous 40+ Photo Contest will be determined by the number of “votes”. The one with the most votes will be the winner, followed by the first and second runners-up respectively. The winner will receive a 3-day/2-night exclusive health and beauty package for herself and one friend.

The TAT hopes that the Fabulous 40+ Photo Contest will further illuminate Thailand’s thriving medical & wellness industry and the wealth of top-quality, convenient, and affordable aesthetic treatments on offer for international tourists of all shapes and sizes.