More and more destinations and DMOs are turning to diversified campaign initiatives in order to reach target audiences. Food is certainly an element very closely connected to the destination and definitely part of the whole on location experience for visitors but for the local community as well.

Niche social networks such as Foodspotting are embraced by DMOs realizing the importance of regaining that focus that is currently lost in the mainstream networks, engaging target audience on a deeper level,  while other destinations focus their marketing efforts on food through dedicated campaign initiatives. Are you hungry yet?

Imagine having the chance to sample real Icelandic food in the country’s most remote and stunning locations? Inspired by Iceland recently took  the dining experience to a whole new level by introducing a new initiative called Eldhús, a pop-up food experience on wheels which travelled across the most remote and extreme areas of Iceland seeking out the best of Icelandic cuisine. Eldhús is an Icelandic word meaning kitchen. Literary, it means house of fire, referring to the part of an house where the open fire would be kept alive for cooking, before the days of metal stoves.

This tasty 12-day expedition through Icelandic gastronomy ran in March and saw Eldhús braving frozen glaciers and volcanic terrain, teetering along mountain paths and stopping off at Iceland’s most extreme beauty spots for tips and native delicacies from local farmers and fisherman.

Through the Inspired by Iceland communities on Facebook and Twitter people of Iceland were invited to nominate themselves or the people they know to take on the role of chef for one night and visitors to Iceland eating at Eldhús were lucky enough to be dined by these winning chefs.

There are likely at least a half dozen specialized communities where your target audience is spending time and interacting online. In these communities, you will find a high percentage of users are interested in your destination and in specific categories.  As larger social networks have become mainstream, niche social networks find their way in many DMOs social campaigns for a chance to connect with target markets on a deeper level, focus their efforts to groups that are already interested and join the discussion that is already going on about their brand. 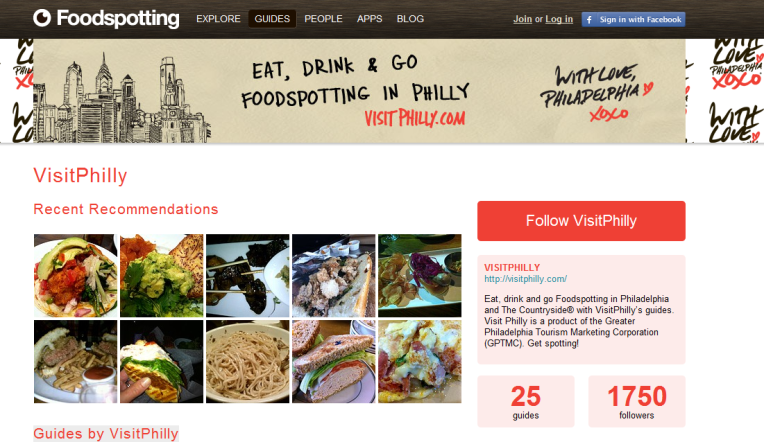 Recognizing the importance and interest of the foodies community to the destination, Philadelphia became the first destination, through the Greater Philadelphia Tourism Marketing Corporation (GPTMC), to launch a major Foodspotting program with multiple guides, a contest at launch and Foodspotting’s marketing support, becoming a featured destination on their web and mobile platform.

One thought on “Targeted Destination Marketing: Engaging the Foodies”