Even though airlines had historically been early adopters of new technologies, they were quite late fully adopting digital media. However especially after the Iceland volcano eruption, paralysing most of Europe’s skies and carriers, major airlines have increasingly adopted social media and updated their digital presence to keep up with younger, higher-income, and more tech-savvy consumers.

It goes however further than that. Through the case compilation below, we see how digital technology can be fully integrated in the entire service spectrum of airlines, from trip planning to the booking process, in flight experience and customer service, certainly applicable to the rest of the travel & tourism industry.

All Nippon Airways (ANA) recently launched Is Japan Cool?, showcasing some of Japan’s attractions and elements of its culture for which the country famous.

The “Is Japan Cool?” site introduces current Japanese trends through articles and video clips of people, places, and social phenomena. Sumo, carousel sushi (low-priced sushi served on a circulating conveyor belt), maid cafés and comic book cafés are just a few examples. Visitors to the website will judge if the featured items are “cool” or “not so cool.” The site was designed to spark interest in Japan, deepen understanding, and encourage people to visit.

Number one position is steadily occupied by Japanese hospitality, followed closely by Japanese toilets, hot spring spas and the iconic Mount Fuji. Items can be opened to find out more information and watch the clip on a bigger screen.

The site itself is simple in functionality and easy to use, even though it could have better integrated social functionalities like the Facebook ‘Like’ to rate items, maximizing its visibility through Facebook rather than having all the action constrained within the site.

KLM‘s new Meet & Seat program, launched in February, allows passengers to choose their own seatmates based on their Facebook and LinkedIn profiles.

Passengers with confirmed reservations can indicate what social information they choose to share, and are presented with a seating chart highlighting other passengers with available profiles. Next, they can select a seat next to someone they find interesting and that person will receive a message with their new seatmate’s profile. The service is mostly positioned by the airline for business travelers although available to all passengers.

“For at least 10 years, there has been this question about serendipity and whether you could improve the chances of meeting someone interesting onboard,” Erik Varwijk, a managing director in charge of passenger business at KLM, told The New York Ties. “But the technology just wasn’t available. Now it is”.

The original three routes were between Amsterdam and New York, San Francisco and Sao Paulo, and the number of intercontinental routes with the service are increasing. 10 new routes are available between Amsterdam and Rio de Janeiro, Buenos Aires, Mexico City, Atlanta, Houston, Los Angeles, Toronto, Johannesburg, Cape Town and Nairobi. The airline hopes to roll out the program on all of its intercontinental flights by the spring.

Remember QR codes? Their spread and effectiveness have been discussed a lot but the appearance of creative examples every now and then comes to prove that if used in the right way and for the right reasons they can be of added value.

Scandinavian Airlines recently launched the “Couple Up to Buckle Up” 2 for 1 campaign.

The campaign used two unique QR codes across every touch point (emails, facebook app, banners, print ads .etc), leveraging an insight into how couples most commonly book trips and prompting the airline’s members to enjoy rather than stack air miles.

Couples would each scan the QR code assigned to them, which would sync their half of a video based offer (if they user is smart enough to scan/play at the same time) and reveal the discount code split across both screens.

British Airways has just launched its own inspiration tool, shortly after Lastminute.com revealed its inspire me technology promoting the best city break deals. 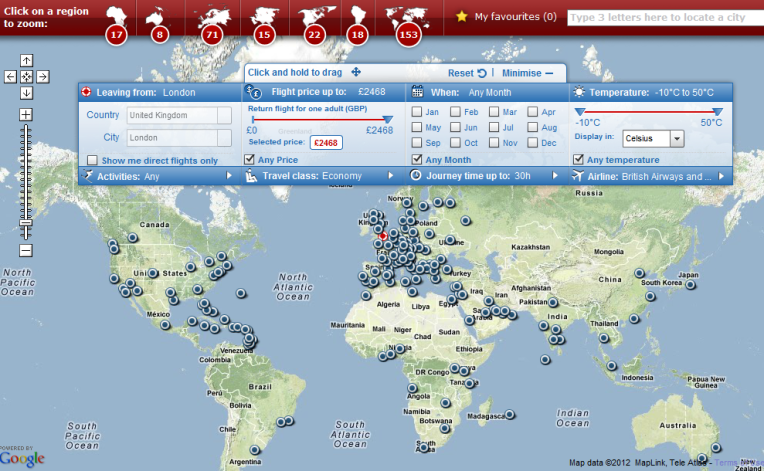 Empowering the argument towards the total integration of trip planning tools into the airlines and OTAs booking systems, the Holiday Finder is available via a direct link or by clicking on the ‘not sure where and when’ section of ba.com’s home page which gives them a number of options including a map-based budget and temperature search. Customers can search using a number of filters including budget, temperature, journey time and star rating.

Students at the Miami School of Advertising have come up with a concept for Virgin Atlantic, aiming to solve one of the biggest problems when we go on holidays every year: the weather. A simple trip plannign tool concept with a single factor.

This idea is aimed at anybody who has ever spent a week getting rained on despite booking a ‘sun holiday’ as it aims to let people book their flights based on nothing but the weather conditions.

Some argue though that simply relying on weather conditions to select a destination, and basing your entire technology around something that uncertain as the weather is not very practical.

A good example of effective two-way communication is the one from Virgin America which used social media to personally contact every single customer that complained on Facebook and Twitter about problems making seat assignments, and changing and cancelling flights on VAA’s website. Technical glitches affected the website when the company upgraded to a new Sabre reservation system last October.

The company was not the only one whose system was affected, however it received a bombardment of complaints via its Twitter and Facebook accounts. Virgin America did not delete nor did it edit negative comments on its Facebook page but made a commitment to answer each and every one of the complaints on Twitter—not with a generic post but with a personal response to each complaining passenger, reaching 12.000.

Here are some examples of Virgin America (@virginamerica) responses:

By using the same social media its customers used, embracing all types of conversations, facing the issue, providing information and being honest and helpful, brands which understand the purpose of social media can build trust with their customers and enhance brand loyalty.