During the ITB 2012, IPK International unveiled the preliminary results of the World Travel Monitor® survey which  show a 5% rise in global outbound travel (with overnights) in 2011 to 750 million (following again of 7% in 2010).

The latest surveys conducted for IPK’s World Travel Monitor® indicate that significant changes are brewing in travel and booking behavior worldwide. For example, more off-season travel as well as continuing increases in online bookings can be expected. Unsurprisingly, the use of “social media” and “smartphones” will also be on the rise as sources of information or assisting in making concrete travel plans.

Even as the global economy may face recession, IPK anticipates a slight 2% growth in global tourism in 2012 coupled with the rifts in the world of tourism widening even further.

Tourism demand will grow in the emerging markets: by 4% in Asia and 6% in Latin America. The traditional European and North American travel markets will remain in a phase of consolidation with only moderate growth rates: 1% for Europe and even a slight drop (-1%) for North America. The release highlights the fact that distinct shifts are expected in the tourism source markets, especially as those in the southern “Euro crises countries” will not be in a position to travel in the manner to which they’re accustomed.

In terms of the types of holidays taken last year, the Europeans showed a preference for beach holidays, this segment increasing 5%. At 12%, the number of tours recorded potent growth while city breaks also saw a 9% increase. Countryside holidays, however, fell by 4%. 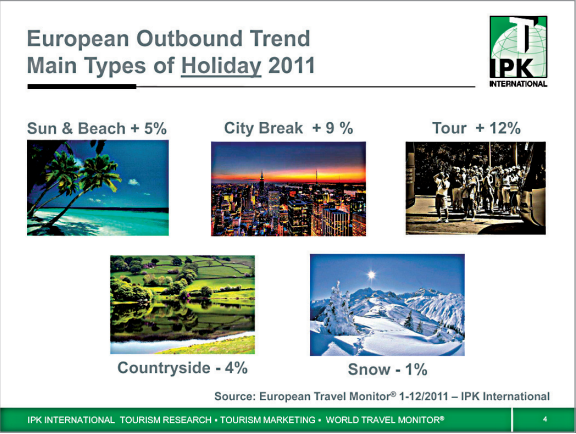 As IPK’s numbers show, Europe’s most important source markets experienced various ups and downs in 2011. Great Britain was the only European source market to experience absolutely no growth last year (0%), while the markets of Germany, the Netherlands, France, Italy and Spain increased their total outbound numbers by 1-2%. 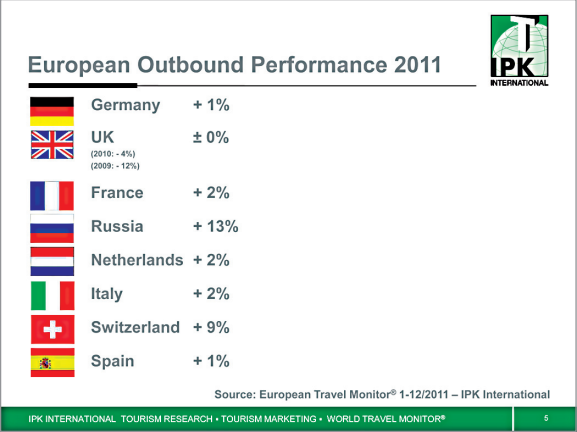 Yet the largest growth in Europe last year, a 13% increase in outbound trips, was achieved by Russia. The outbound trips of the Swiss also recorded an impressive increase (+9%).

Once again, there was no change in the Germans’ top three holiday destinations in 2011: Austria came in first (16% market share), followed by Spain (15%) and Italy (13%). All three were able to hold onto their market shares with single-digit growth rates. Other popular outbound holiday destinations for the Germans last year included Turkey (8%), France (6%), the Netherlands (5%), Greece (4%) and Croatia (3%).

Germans taking more holidays at home as well as abroad

When it comes to their holiday trips, the Germans again showed a preference for staying closer to home, with the number of domestic trips rising 5% last year to 92.9 million. However, German outbound holiday travel was also able to post a robust 4% gain to 52.7 million holidays this time.