“Stories are the things that mean most to you later in life, and New Zealand provides a life changing experience,” said Tourism New Zealand general manager marketing communications, Justin Watson.

“A strategic focus of all our marketing activity is the prioritization of key markets and sectors for growth. “We are targeting the key youth market because of the substantial growth opportunities they present. They have the potential to stay longer, spend more and are more likely to return to New Zealand later in life. “What we offer as a Country is ideally suited to the youth traveller,” he added. The campaign is being rolled out globally over the next year and will use youth-friendly digital and social media via newzealand.com, Facebook and YouTube.

“The stories shared essentially become the content of the campaign and build on the experiences that we show on the site and use to advertise the initiative to get youth travellers to sign-up and enter the competition.“This enables us to engage with the youth market in a way that really resonates with them,” added Watson.

Key to the development of both this initiative, and the overall youth strategy, has been establishing relationships with key partners in each market such as STA in the UK. “We have also partnered with Air New Zealand and a number of New Zealand operators to provide the experiences of a lifetime, and are also working with in-market sellers to provide related products so people can also buy the experiences we are showcasing to them,” continued Watson.

As the flooding situation in Thailand has stabilized and flood waters are receding, the Tourism Authority of Thailand (TAT) is accelerating its efforts to ensure travellers and tour operators worldwide to understand that Thailand’s tourism sector is open for business and welcoming visitors through a recovery campaign called “Beautiful Thailand”.

Although the flood mainly affected provinces in the Central Region, it had minor impact on tourist attractions throughout Thailand. “For the past several months, the TAT has been reaching out to media worldwide and tour operators to give them an accurate picture of the situation in Thailand. We made it very clear that most of Thailand’s tourist destinations were welcoming visitors, the airport was operating and inner Bangkok was dry. We also emphasized that there was really no need to avoid coming to Thailand during the high season,” said TAT Governor Suraphon Svetasreni.

To ensure the rapid recovery of the Thai tourism sector, the TAT is conducting a comprehensive communications and marketing campaign called “Beautiful Thailand”. It involves engaging media from key markets worldwide. The TAT is also planning a mega fam-trip during December that will bring over 300 travel media from overseas to see for themselves that most of Thailand’s tourism attractions and infrastructure remain intact. 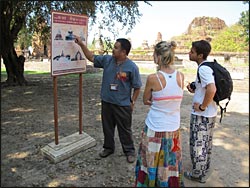 The TAT’s 25 overseas offices are working directly with tour operators in their local markets to develop campaigns and promotions to restore confidence and support tourist arrivals. These initiatives include special promotions with airlines and tour operators, TV and movie production, and celebrity marketing.

According to Governor Suraphon, the most effective strategy to restore tourist confidence and build lasting momentum for the Thai tourism sector is to focus on value-added services and warm Thai hospitality, not engage in price cutting.

“Recovering from a significant event such as this year’s flood requires the full co-ordination and co-operation of the public and private sectors. The TAT has been serving the tourism community as a bridge between the public and private sector. All of us in the tourism industry must work together to provide unified, clear messages about the real situation in Thailand to help to build confidence and show that we are open for business and visitors can enjoy their holiday here”.

You can travel to the far reaches of the globe and not see and experience what you can discover in Kentucky. There’s only one Mammoth Cave, one Birthplace of Abraham Lincoln, one National Corvette Museum, one Kentucky Horse Park.

Kentucky’s wealth of unique attractions forms the basis of the state’s 2012 travel and tourism marketing campaign. The new campaign, called “There’s Only One”, will differentiate Kentucky from other destinations by emphasizing places and things travelers to and within the Commonwealth can experience that cannot be replicated anywhere else.

Thirty-one places and events have been designated “There’s Only One.”  More will be added after undergoing a certification process.

The concept of “There’s Only One” will be used to draw visitors to Kentucky and then encourage them to explore all Kentucky has to offer. In the spring, when most vacation decisions are being made, TV, radio and print ads will combine with on-going social media and on-line campaigns to raise awareness of Kentucky’s unique attractions.

“Puerto Rico Does It Better”

The U.S. tourism campaign, budgeted at $20 million and running through June 2012, uses both traditional and new, innovative media and marketing tactics to reach its audiences. This year’s program places an increased emphasis on social media to reach American tourists. This includes search engine marketing and optimization, the launch of official Twitter feeds, YouTube videos and Flicker images, new smartphone applications and a re-vamped website — www.seepuertorico.com — where would-be travelers can learn about the island through written and video content, find promotional packages and even book travel directly.

Puerto Rico used nine of Times Square’s electronic marquees simultaneously lit with the campaign’s new ads. These ads — which feature images of tourists enjoying activities such as golf, snorkeling and gaming — will also be displayed on billboards, airport and bus shelter dioramas, and in newspapers and magazines in major U.S. markets.