In a highly competitive tourism marketplace and especially during times when every part of the available tourism funds matters, cooperation in tourism development and marketing at a regional and cross country level is certainly the way forward.

The initiatives that follow, initiated by destinations all around the world, show us that when it comes to tourism product development and targeted marketing, for increased destination awareness, visitors expenditure and local economic development, two -or in some cases more- is better than one!

The campaign is built around a website —www.visitchinaandkorea.com— featuring vacation packages to both China and Korea. The website is being promoted through an extensive campaign of both banner and search engine advertising. The objective of the joint marketing campaign is to raise awareness of travel to China and Korea, as well as to promote U.S. outbound travel bookings to China and Korea by driving traffic to tour packages featuring both countries. The campaign began in September and will run through December. The new website features a range of itineraries from experienced tour operators. 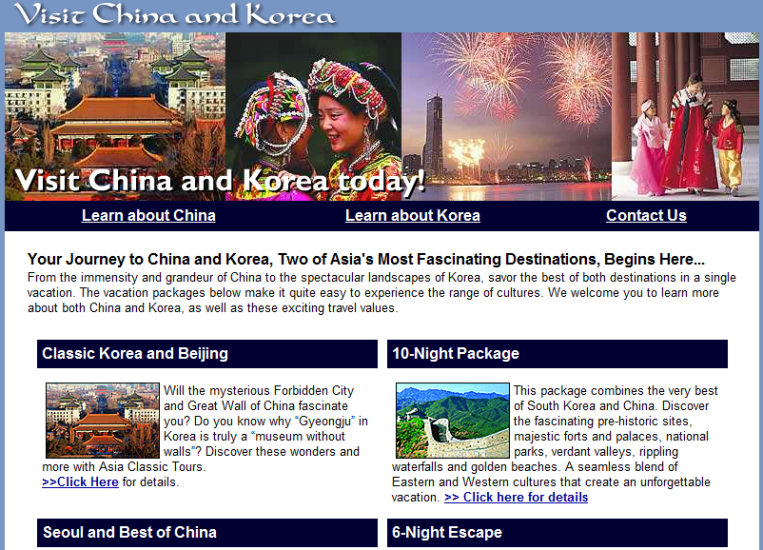 “By working with our supplier partners to develop these exciting and appealing tour packages, we will be able to provide diverse choices for travel consumers looking to discover the true magic and meaning that make up China and Korea,” said Xinhong Zhang, director of the China National Tourist Office in New York.

“The travel marketplace is ultra-competitive. It is no longer enough to fly to one destination in a region, even to China. We must make it as easy as possible for tourists to come and discover China and Korea, and begin to see what these two countries have to offer for a complete vacation experience.”

Seeing potential in attracting more travelers from Asia, New York City’s tourism agency recently announced a partnership with the government of the South Korean capital to spark more cultural and recreational visits between the two metropolises.

As part of the agreement, an advertising campaign will appear in the entertainment and shopping districts of both cities. More than 130 posters in Seoul will promote travel to New York City; 70 posters in the city will encourage New Yorkers to visit Seoul. Digital ads for Seoul also will appear in Times Square. In addition, Korean Air is offering a discount on flights between Seoul and New York City for a limited time.

The two cities have much in common. “Both are global leaders of business, innovation, design and style,” said George Fertitta, chief executive of NYC & Company. “Both are pop culture capitals.”

The partnership is NYC & Company’s first with an Asian country. It previously formed partnerships with London, Madrid, Sao Paulo and Miami. NYC & Company said travel from South Korea to the United States rose 49 percent last year. About 223,000 South Koreans visited New York City in 2010. Among them, about 60 percent visited for leisure and 40 percent to see friends or relatives. More than 650,000 traveled from the U.S. to visit Seoul, a city of almost 10 million.

The Netherlands Board of Tourism and Conventions (NBTC), the France Tourism Development Agency (Atout France), Air France and KLM launched a new social media promotion, called “What’s Your City-Self?” Are you a fashionista or an avid art lover? A design aficionado or a foodie? Until Oct. 26, the national tourist boards of France and The Netherlands as well as Air France and KLM, aim to help U.S. and Canadian travelers discover the individual character that each of these cities have to offer.

“Travelers from the U.S. and Canada often don’t realize how close Amsterdam and Paris are to each other,” said Conrad van Tiggelen, director, North America for NBTC. “By finding out your unique city-self through our joint Facebook application, we’re hoping travelers will be inspired to visit either destination this fall.”

By answering five questions, travelers can find out if they have more in common with Paris or Amsterdam. Once they have uncovered their city identity, travelers will be given itineraries and detailed information on what attractions to visit on their next trip to either Paris or Amsterdam. By entering the quiz through the NBTC, Atout France, Air France or KLM Facebook pages, contestants are automatically entered for the chance to win one grand prize trip for two and experience two nights in Paris and two nights in Amsterdam, including complimentary air transportation on both Air France and KLM.

CANTATA2 is a 2.2. million euro tourism development project funded through the Interreg IVB Atlantic Area Programme and working in Denbighshire in North Wales in the UK; Shannon, on the West Coast of Ireland; Galicia, in North West Spain; Poher, in West Central Brittany, France and Montemor-o-Velho, in Western Portugal.

Originally piloted in County Clare, Ireland, as the Live the Life Scheme, it was recognised that tourism is a key economic driver in Europe but recent research indicated that visitors were becoming increasingly suspicious of mainstream marketing; they suffered from marketing overload and could be disappointed by their tourism experiences.

Mainstream tourism drives the visitors to tourism ‘hot spots’ or ‘honey pots’ whereas CANTATA2 aims to move visitors from the ‘hot spots’ to more peripheral and under developed areas and deliver authentic and genuine visitor experiences, thus promoting and strengthening local distinctiveness.

CANTATA2 is the second phase of this project, following a successful phase one that ran from 2005 to 2008.
In phase one, the project carried out research studies and made connections with the local tourism trade to get to know the local businesses and their problems. It also worked with the trade to help promote the local distinctiveness as well as providing opportunities for SME’s and micro-businesses to network and undertake skills training designed specifically for them. The project started at grass roots level, bringing in the local trade early on to tell CANTATA what they wanted from the project as well as steering the project on an ongoing basis. Its success lay in the ability to fill gaps that other projects and funding streams were not able to fill and in it approach to working in an organic manner, continually developing its actions to meet the needs of the tourism trade.

CANTATA2 will capitalise on the knowledge gleaned from phase one and develop the ideas into tangible results. The business networks will be strengthened and more ownership by the local trade will be visible. Results will also include actual tourism products to attract and retain visitors, such as food trails, e-tourism products and trails, cultural events, marketing campaigns. New, innovative technology and marketing methods will be explored and utilised and skills in such will be passed on to the trade.

People are at the heart of CANTATA. The project is intended to foster a sense of pride within these local communities, pride in the region and in the way of life. This will communicate itself to the visitors in terms of a welcoming attitude and in-depth knowledge of the area, a confidence that what the area has to offer is of interest and value to the visitors.

Swaziland, for instance, is renowned for its culture and festivities, Mozambique is known for its beaches and vibrant nightlife, and Mpumalanga for its wildlife in Kruger National Park and also the breathtaking natural landscape. The proximity of these countries to one another was seen as something that would make it possible for tourists to have a wholesome experience in a short space of time. They can travel on their own or use tour operators to follow a set route that involves the three countries.

“The new brand will be targeting… international markets such as the United Kingdom, France, Portugal and Italy, to name but a few. Mpumalanga will lead with its flagship wildlife offerings, Mozambique with its pristine beaches and Swaziland will focus on an authentic cultural experience,” said Mpumalanga Tourism and Parks Agency (MTPA) spokesperson Kholofelo Nkambule. The new regional brand seeks to position the region as a world class tourism destination, contribute to employment creation and economic growth.

The launch of the Three Countries, Three Cities brand follows the signing of a Memorandum of Understanding that was signed by the MTPA, National Tourism Institute of Mozambique (Inatur) and Swaziland Tourism Authority (STA) in 2009. “Stronger relations have been forged with our counterparts in Mozambique and Swaziland, which will make transfrontier tourism a reality, presenting some fantastic multi-destination opportunities for local and international tourists alike,” said Nkambule.

MTPA acting chief executive Nthabiseng Motete said the new brand would also develop sustainable and responsible tourism, participate in the conservation and protection of biodiversity and preserve cultural value and national pride. “The three destinations truly complement one another,” said Motete. She said the new brand would lead to increased lengths of stay, which would translate into economic spin-offs for the region.

Inatur chief executive Hermenegildo Neves said the three countries would work together for a common goal, which is to establish a common business framework for tourism in the region. “By working together, we can all achieve a much more desirable destination status, pooling our resources where marketing and product development are concerned”.