International tourism grew by almost 5% in the first half of 2011 totalling a new record of 440 million arrivals. Results confirm that, in spite of multiple challenges, international tourism continues to consolidate the return to growth initiated in 2010.

International tourist arrivals are estimated to have grown by 4.5% in the first half of 2011, consolidating the 6.6% increase registered in 2010. Between January and June of this year, the total number of arrivals reached 440 million, 19 million more than in the same period of 2010. 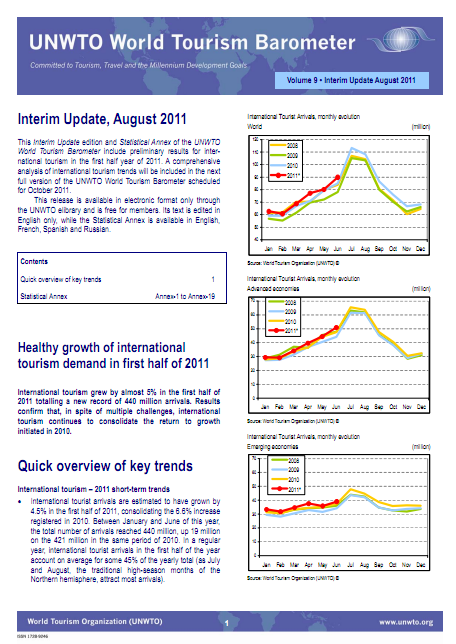 Growth in advanced economies (+4.3%) has maintained strength and is closing the gap with emerging economies (+4.8%), which have been driving international tourism growth in recent years. This trend reflects the decreases registered in the Middle East and North Africa, as well as a slight slowdown in the growth of some Asian destinations following a very strong 2010.

“The sustained growth registered in tourism demand in such challenging times clearly makes the case for the sector and reinforces our call to consider tourism as a priority in national policies. Tourism can play a key role in terms of economic growth and development, particularly at a moment when many economies, for the most part in Europe and North America, struggle for recovery and job creation,” said UNWTO Secretary-General, Taleb Rifai.

All world (sub)regions showed positive trends with the exception of the Middle East and North Africa. Results were better than expected in Europe (+6%), boosted by the recovery of Northern Europe (+7%) and Central and Eastern Europe (+9%), and the temporary redistribution of travel to destinations in Southern and Mediterranean Europe (+7%) due to developments in North Africa (-13%) and the Middle East (-11%). Sub-Saharan Africa (+9%) continued to perform soundly.

The Americas (+6%) was slightly above the world average, with remarkably strong results for South America (+15%). Asia and the Pacific grew at a comparatively slower pace of 5%, but this more than consolidates its 13% bumper growth of 2010.

Results from recent months show that destinations such as Egypt, Tunisia or Japan are seeing declines in demand clearly reverting. “We are very encouraged to see demand picking up in such important tourism destinations and call for continued support to these countries which are today fully ready to receive travellers from all over the world,” added Mr. Rifai.

So far, the growth of international tourism arrivals is very much in line with the initial forecast issued by UNWTO at the beginning of 2011, 4% to 5%, for the full year 2011, a rate slightly above the 4% long-term average.

As international tourism receipts were more affected by the 2008-2009 crisis and recovered somewhat slower than arrivals in 2010, this year should also see their further improvement.

Following an encouraging first half of 2011, growth in the remainder of the year is expected to soften somewhat as recent months have brought increased uncertainty, hampering business and consumer confidence.

For the full report : mkt.unwto.org