The World Centre of Excellence for Destinations (CED), recently announced the signing of an important agreement with eight partners of Côte-Nord, with the goal of implementing its System of Measures for Excellence in Destinations in this north-western Québec destination.

This agreement was officially confirmed on August 17 by Mr. Julien Boudreau, President of the Conférence régionale des élus (CRÉ) of Côte-Nord, and Mr. André Vallerand, President of the CED, in the presence of the presidents of Tourisme Côte-Nord/Manicouagan and of Tourisme Duplessis, as well as representatives of the Côte-Nord CLD and  Dr. César Castañeda Vázquez del Mercado, Director of operations of the CED. 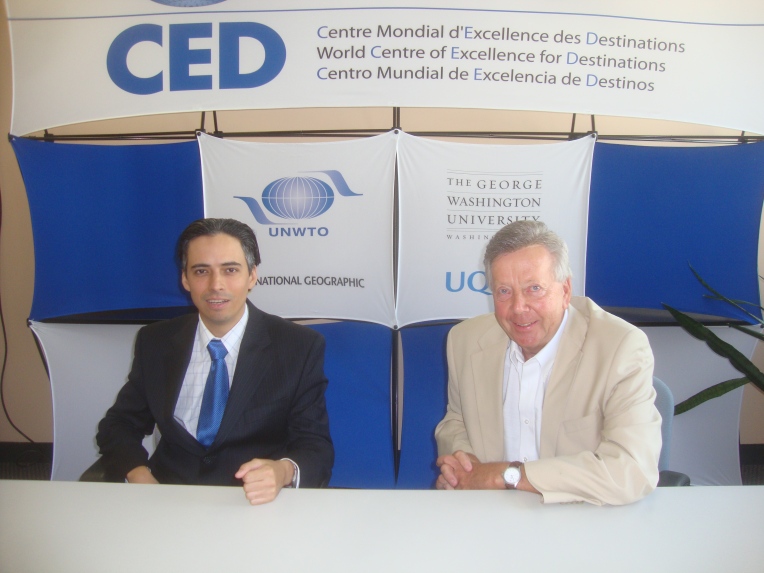 This agreement aims to establish a tourism profile of the Côte-Nord region, to assist it in gauging itself to face international competition, while facilitating the attainment of its objectives in sustainable development. The System of Measures for Excellence in Destinations (SMED) also aims to improve the quality of the experience offered to tourists and to strengthen the geographical character of a region as a tourist destination (environment, culture, aesthetics, heritage, well-being of the residents, etc.) while strategically identifying major issues facing tourist destinations around the world.

“This agreement with Côte-Nord is the third in Canada. Côte-Nord is a large region with unique features. The CED will make its expertise available in the region, to contribute to the development of this important tourist region of Québec,” said André Vallerand, President of the CED. To date, more than a dozen destinations in the world have already been evaluated by the SMED. Several others have expressed interest in reaching an agreement with the CED.

The Côte-Nord region will benefit from an external expertise to take an objective look at the tourism industry in the region thus allowing for the direction for future developments. This is a first step in developing a regional tourism strategy. This approach relies on the contribution of tourism and economic stakeholders who will, by their actions, play an important role in the development of this beautiful industry”, declared Mr. Julien Boudreau. The development of tourism in Côte-Nord is a collective project that involves the entire population, taking role as ambassadors.”

With its headquarters located in Montréal, the CED began operations in February 2007. The CED has signed partnership agreements with Canada Economic Development for the Quebec regions, the Ministère du Tourisme du Québec and the Ministère des Affaires Municipales et des Régions du Québec.

The CED is a non-profit organization dedicated to the research and creation of tools to support the development of sustainable tourism for destinations around the world. In performing its mission, the CED executes and further develops the tasks of the Destinations Council and other departments of the World Tourism Organization (UNWTO). It does so by adding value and expertise to the policies and innovative practices concerning tourist destination management. The UNWTO is a specialized agency of the United Nations with 153 member states and some 300 associate members from the tourism industry.

About the regional partners

La Conférence régionale des élus (CRÉ) of Côte-Nord is a privileged partner of the Government of Québec for all matters relating to regional development. Its mandate is to consult stakeholders in the region, to provide advice to the government and to elaborate a five-year development plan. Its mission is to defend and promote the interests of Côte-Nord.

CLDs are organizations that promote the economic development of their MRC by providing developers tools and services tailored to their needs in order to support local development and entrepreneurship.

Manolis Psarros, Managing Director of abouTourism international destination consultancy, acts as a country representative for the World Centre of Excellence for Destinations (CED), in Greece, and is a System of Measures for Excellence in Destinations (SMED) expert.