Legendary football club Real Madrid had signed a deal to promote Spain and Madrid as tourist destinations in April.

The new marketing campaign “Visit Spain, Visit Madrid”  is now ready and shows all of Real Madrid’s star players, like Cristiano Ronaldo act as “brand ambassadors” for both the Spanish capital and the country as a whole.

Tourism authorities expect the three-year agreement will reach a potential audience of over 300 million people because of Real Madrid’s worldwide fan base.

A Spanish Tourist Office spokeswoman had commented after the agreement was secured: “This is a groundbreaking agreement in which both Madrid and Spain will be promoted internationally through one of the most renowned clubs worldwide promoting both tourism brands to all corners of the globe.

The Valencia Region Tourist Board has launched a new five million euro (£4.4 million) global marketing campaign to promote the destination – including the Benidorm, Valencia Terra i Mar, Costa Blanca and Castellon brands – both nationally in Spain and internationally in key markets including the UK.

Using the strapline “Intense experiences must be shared”, the two-year multi-media campaign is centred around the traveller as generator of content and key influencer through the use of social media.  It combines innovative online, social media and street marketing with traditional media advertising and PR. 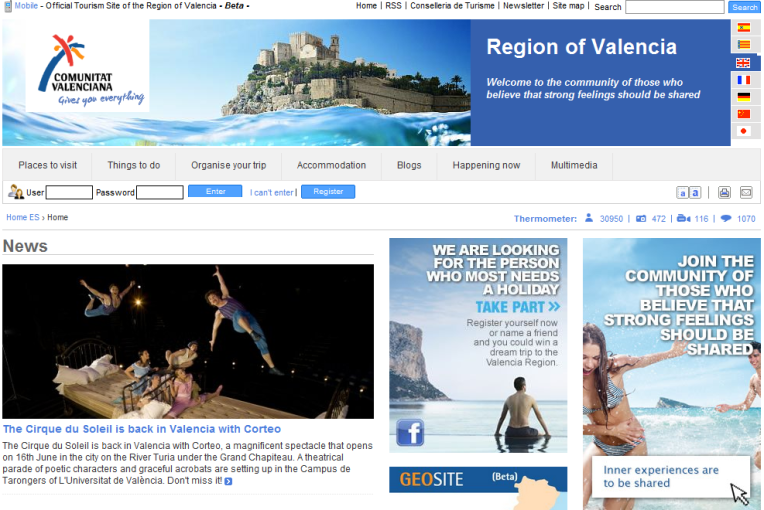 Regional Tourism Minister , Belen Juste, explains: “Travellers nowadays like sharing their holiday experiences with others on Facebook, Twitter, YouTube or Flickr; they read other people’s comments or travel blogs before planning their holiday; and use their mobiles to stay informed and connected before, during and after their trip.  Our new campaign reflects all this, building on some of the initiatives that we have already introduced, such as blogger fam trips, mobile apps and advergames.”

The new global campaign kick-started this week in Spain with a major promotion at Madrid’s Atocha train station, departure point for the new AV E high-speed train to Valencia, and a series of TV and radio ads that invite consumers to live intense experiences in the Valencia Region.  This will also be the theme of a special roadshow which will visit 11 European cities including Liverpool and Birmingham.  Other activities planned include the creation of themed microsites on http://www.comunitatvalenciana.com, YouTube branded channels, more advergames and new mobile phone applications to help visitors make the most of their trip to the Valencia Region.

One thought on “Spain: New Tourism Campaigns for Madrid & Valencia”