The campaign launched in Australia on 9 January with three television commercials and digital content carrying a ‘New Zealand 100% Pure You’ tagline.

Tourism New Zealand CEO Kevin Bowler said the campaign was an evolution of ‘100% Pure New Zealand’. It was a strategic response to research conducted in 2010 that found that personalising New Zealand’s marketing message and placing a greater emphasis on experiences would help increase visitor numbers.

The move has been well received by many in the industry, including the Tourism Industry Association (TIA), Tourism Holdings Limited and Destination Queenstown.

TIA Chief Executive Tim Cossar said the New Zealand 100% Pure You campaign positioned New Zealand as a modern destination with activities to suit a variety of visitor types. It recognised that New Zealand had more to offer than scenery and adventure activities, he said.

“The 100% Pure campaign has continued to evolve since it was introduced over a decade ago. The industry still feels strongly that the 100% branding remains a big asset and this new activity will take it in a new and interesting direction.

“Nothing stays the same and the last few years have illustrated that clearly to our industry. As a country our campaign activity must remain fresh and relevant while ensuring that the unique attributes and culture of New Zealand are well positioned in international customers’ minds.This new activity well help that happen and extend the reach of the 100% Pure New Zealand campaign.”

“As always, the industry will be looking at how the new activity delivers customers into their businesses. This is always the most important signal of success.”   Source: www.tourismnewzealand.com 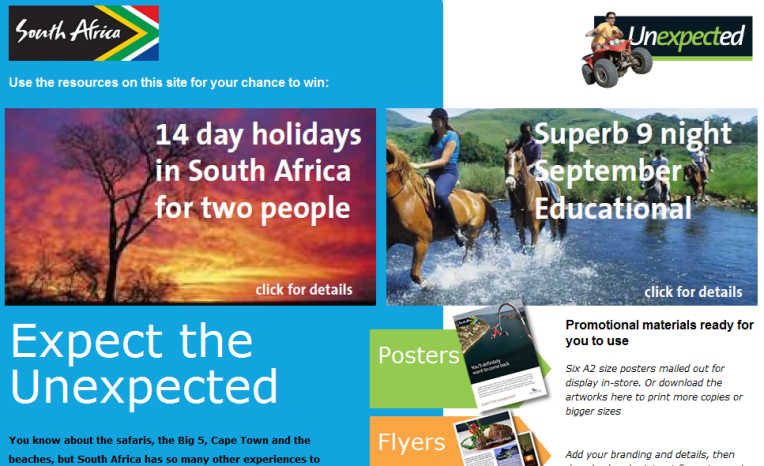 The campaign, with the strapline ‘South Africa – Expect the Unexpected’, launches this month featuring postcards and e-newsletters which will target independent travel agents. The dedicated microsite, http://www.sa-unexpected.co.uk, will showcase 15 of the most popular itineraries offered by Africa Collection.
Source: www.mandmglobal.com

Etihad has designated 2011 as “the year of Abu Dhabi” with the launch of its “essential abu dhabi” destination marketing campaign. Designed to enhance Abu Dhabi’s place as a top tourist and MICE destination, the campaign will see Etihad unveil a number of exciting promotional activities across the globe.

For the first time, all the major tourism operators in the emirate of Abu Dhabi have come together under one showcase umbrella to promote the very best UAE’s capital has to offer. Hotels, tour operators, dining outlets, shops, adventure parks, cultural attractions and sports facilities are providing a range of offers, to entice tourists and business travellers alike, to spend time in Abu Dhabi with a wide range of fantastic discount offers and deals. 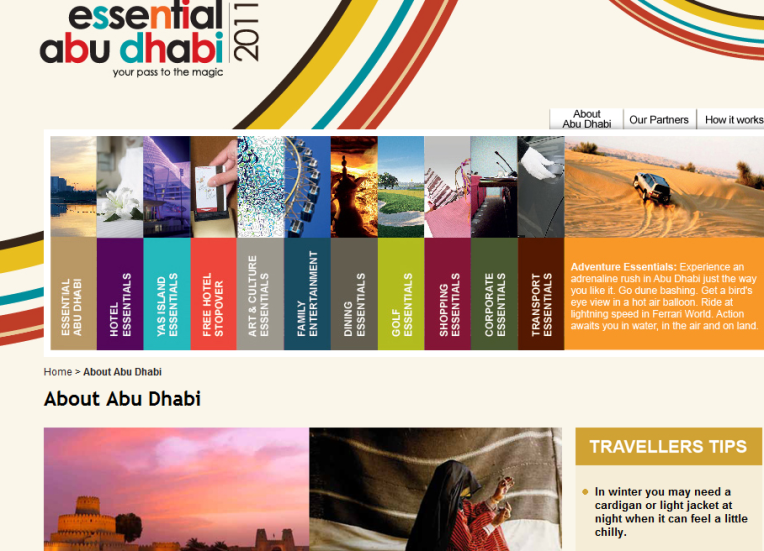 “We have had a fantastic response from Abu Dhabi’s hotels and attractions, and are excited to be working in tandem with people who are as passionate about promoting our home base as we are.

“We will be promoting essential Abu Dhabi in all of our overseas destinations, as well as online and in-flight, and refreshing the program’s special offers regularly so that frequent visitors will always have something new to look forward to.”

A dedicated website, essentialabudahbi.com, launches today, backed with brochures on board all Etihad aircraft featuring the exclusive offers. The program will be also supported with an international marketing campaign co-funded by all the partners; as well as being promoted through all partner outlets and sales channels.

The campaign is being supported by the Abu Dhabi Tourism Authority as a major partner and demonstrates the commitment of the entire local tourism industry to work effectively together to promote Abu Dhabi as a major global destination.

As well as appealing to visitors planning a trip to the UAE, the programme is also targeting the millions of passengers transiting through the Abu Dhabi hub, to entice them to stopover in the city for a few nights. Free stopover room nights will be made available to such passengers in the near future.

Korea Tourism Org’s Dubai office announces the starting of the first 2011 campaign ‘Korea Grand Sale 2011,’ the biggest national shopping tourism festival, in the country’s major cities such as Seoul, Busan, Jeju and other cities for 50 days from January 10 to February 28 in 2011.

“Korea Grand Sale” is a nation-wide shopping tourism festival during which foreigners can enjoy shopping, food, hotel accommodation, cultural show and other tourism resources in Korea. This festival is aimed at enhancing the image of Korea tourism as a shopping destination and to attract more visitors to Korea while offering diverse convenience.

Especially major retail outlets, so called ‘Big 20’ and more than 13,000 of its branches, shops and stores are going to participate in the festival. The scale has tripled compared with the previous “Seoul Grand Sale 2010” held by Seoul Metropolitan City last summer. 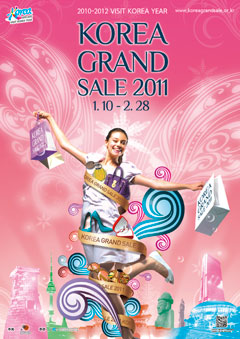 During the period, various delightful road events are prepared to make for a rich shopping tourism festival as well.

A discount coupon and membership card is required to have benefits at the chain stores of the participating companies, Special Tourist Zones, major tourism sites, and road event venues and it is available at Korea Tourism Organization Dubai office.