Brazil is highlighting its tourism attractions and its role as host of the 2014 FIFA World Cup with a ground-breaking exhibition in Johannesburg. “Casa Brazil – Sensational Brazil” is being held at Sandton Convention Centre alongside World Football House for the duration of World Cup in South Africa. Based in an area of 2,900 m², the exhibition is the main instrument of the Brazilian government during the World Cup in South Africa to promote the country as the next host of the competition. Highlights will include the unveiling of the official 2014 World Cup logo. Tourism Minister Luiz Barretto said the World Cup would increase the number of foreign tourists from the current five million to eight million in 2014. “It is the first kick to 2014 and the chance to make Brazil a great tourism destination,” he said.  source: http://bit.ly/94hZ7D

BreathtakingAthens.Com, the official visitors’ website of Athens, Greece has just launched a new web initiative titled ”This is Athens”. The campaign’s objective is to create the largest photostream ever made for Athens. Click on the the photo below to visit the website. 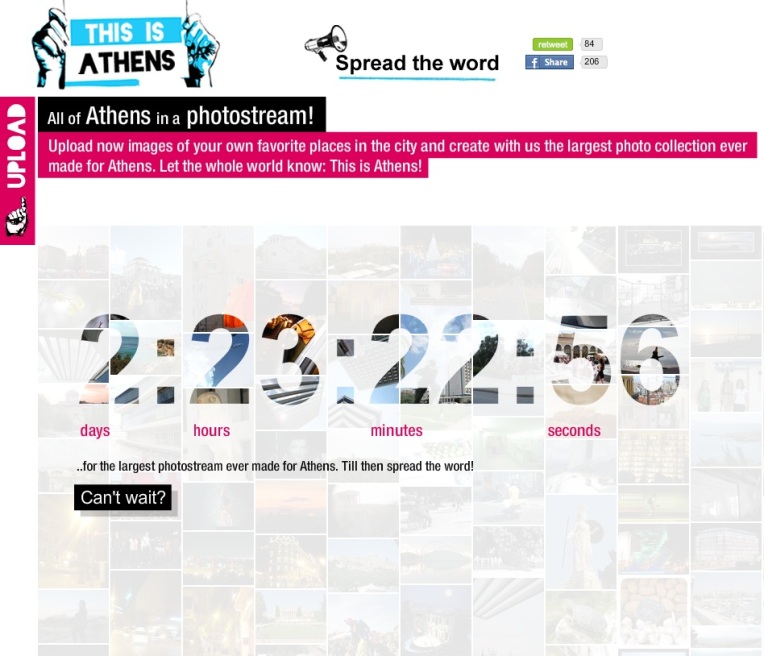 New York Promotes Itself as the Anti-Vegas in New Campaign

A new international marketing campaign by the Big Apple is selling the city as the anti-Las Vegas. “What happens here is transformative. It stays with you forever,” marketing director Jane Reiss said about a message that will say on television, in print and on billboards around the country and in Australia, Brazil and Europe. The message, “See More, Be More,” is part of the “This Is New York City” campaign that began three years ago, and is in direct counterpoint with Vegas’ popular saying, “What happens here, stays here.” The new campaign will be seen across the country and in multiple destinations throughout the world. It also will feature promotional packages from leading corporate partners, including American Express, American Airlines and Travelocity, among others. The efforts are expected to provide even more momentum to a tourism industry that employs more than 308,000 New Yorkers and generates $28 billion plus in economic impact. City officials are hoping the new tactic with help Mayor Michael Bloomberg achieve his goal of drawing 50 million tourists annually by 2013, despite the falling buying power of the euro, the New York Times reported. source: http://bit.ly/9S0BUI

Sydnicity – will you be there?

What is it about Sydney that makes her such a wonderful, magical place? What is it about this city that makes you feel so positive, so happy and so alive when you are here? Is it the bright blue water? Is it the natural beauty? Is it that liberating feeling that at any time anything is possible in this wonderland? There is something indefinable that puts Sydney in a space of her own. It’s a real ‘you have to be there’ type of place. The English language seems to be devoid of that one perfect, all encompassing word that is able to totally sum it up. So we created a word that will come to mean all that’s fabulous about Sydney. That word is Sydnicity. source: #mce_temp_url#